実況プレイ series, which can be found easily on youtube or niconico douga, are an incredible way to improve your Japanese. Usually they are based on older games, where you watch a Japanese person playing through a video game (you only see the screen that they see), and the Japanese person is narrating his play with comments, criticism, jokes, and talking with the viewer (you). 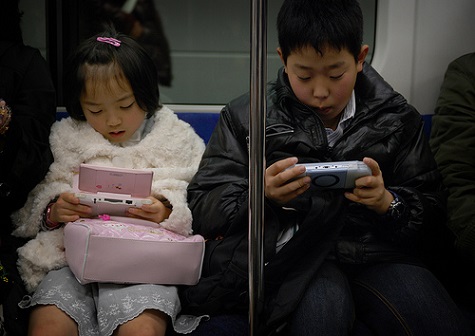 While I can’t vouch for all 実況プレイ, I’ve seen my share of incredibly entertaining ones.  You get to listen to some very natural, on the spot Japanese. Since one video game will use the same words over and over again, it is some great repetition practice. You will  end up cheering on the narrator, as well as get frustrated every time he makes a silly mistake and shouts out (もう～！）.  One game is usually split up into about 20-30 videos, that are updated once a week as the person plays through the video game.

My favorite and one of the most popular 実況プレイ on YouTube is called 青鬼を実況プレイ！, with a few hundred thousand views per part. It’s an older game (maybe SNES?) where a bunch of kids are trapped in a giant mansion, and they have to find their way out while being pursued by a giant blue demon with a big funny looking head (You’ll laugh when you first see it). Hearing the narrator scream like a girl when the demon first appears is quite amusing.

When you view one 実況プレイ in YouTube, under the “Suggestions” on the right, you’ll see other interesting ones, covering both present and older games. Make sure you start from part 1 of a  実況プレイ series.

(Update: Old series was deleted, so I’m updating it with the new version by Hikakin)

Some other examples:
Ju-on
A user’s channel that makes alot of these types of 実況プレイ

And even if you still are thinking to yourself “this guy is crazy,” just take a quick look and you may be pleasantly surprised. Think of it like playing a video game together with your Japanese friend who is hogging the controller.