There lives a legendary toy repairman. Regardless of how simple or complex your toy is, he will fix it like it never was broken. No one knows his name, or his face, or even his gender, but they know his skill. His technique is to completely break the toy to its simplest elements. Then build it back up again. He works on multiple toys at a time, and mixes all the parts, yet still manages to put them back together.

A mysterious girl who always wears sunglasses tells her friend the story of how when she was a young girl, carrying her baby brother on her back, she had a horrible accident climbing up stairs that cost the boy his life. Her only solution was to bring the boy to the toy maker and have him repaired.

There is also a movie (I haven’t seen it, but the trailer is just strange as hell) Chinuma has a problem. He can’t go anywhere he has been before. Its not that the places he’s been to don’t exist, or that he forgot where he’s been. He just can’t return. If he tries to go to a restaurant he’s already eaten at, he can’t find it again. However if he’s not intentionally looking for it, he’ll often stumble across it like nothing ever happened.

Unsure if this is some strange problem with his sense of direction, he is too afraid to ask anyone if this is normal, for fear that something may actually be wrong with him. While pondering this issue and what to do, a man named Shinoda approaches him in a restaurant telling him that he’s his close friend. Chinuma doesn’t recognize him at all and asks for an explanation. Shinoda continues telling him that they were close friends, but only in Shinoda’s reality.

Completely confused and unsettled by Shinoda’s approach, Chinuma requests a full explanation of how they were best friends and why he wouldn’t remember him.

Shinoda tells the story of the two as university students. Shattered by tragedy, they take a dangerous journey into trying at any length to save the woman they both fell in love with, which results in an utter living hell altering their reality. This story is intensely creative. What starts off as the pursuit of some kind of memory issue turns into an incredible tale of the unfortunate fate these two created for themselves.

One of the best stories I’ve read in a long time. The second you finish it you’ll want to immediately read it all over again to make sense of what you just went through.

(This story is found in the above novel 玩具修理者, and is half the book) Yuushi invites his old friend Izumi from high school to go with him to a night market. As he takes her out far away into a maze like forest, Izumi realizes that something is off. They arrive at the “Yokai Night Market,” which connects this world, the demon world and many others, for an open market where you can buy whatever your heart desires.

This isn’t Yuushi’s first time here. At the age of 7 he first stumbled across the night market with his younger brother. Not realizing the important rule that you must buy something to be able to leave the market, the two stumbled upon it with no money and were trapped. Yuushi was tempted into selling his younger brother to a human dealer, in exchange for his escape and a bonus of receiving “baseball talent.”

As a scared young boy he accepts, excels at baseball, and returns to his normal life. But his little brother is gone. He has ceased to exist for everyone except in Yuushi’s memory.

10 years later Yuushi is back to the night market with one purpose. To find his little brother that he left behind. Armed with his life savings of 720,000 yen (around $7000), his friend Izumi, and prepared to do anything to get his brother back, he makes his way to the human dealer’s booth… A young child gets separated from his family while at the park. Luckily a strange old woman stumbles upon him and tells him how to get home.

“Take this road. Just get home before dark, otherwise the ghosts will come out.”

At just 7 years old, our main character follows his way along the strangest road he’s ever been on. It’s unpaved, no one else is in sight, and the backs of houses are all facing inward. After walking for hours on this desolate trail, he finally finds his way home.

Years later, he tells his best friend Kazuki about the experience he had as a younger child. Kazuki doesn’t believe him, so he has to be shown. Feeling adventure, they both decide to follow the road to the park where he got lost as a child. But no matter how far they walk, it never appears. As it grows later, Yokai (Japanese spirits) wanderers start appearing walking on the road.

They come across a local inn, and hoping to find an escape, a friendly wanderer (Ren) tells them they are on the Old Road, and it is very rare to see humans. The only way to leave is to find a proper exit. Ren agrees to help them get out. But the Old Road is full of danger. Will they be able to escape before the Old Road claims the two children as a part of it?

(This story is found in the above novel 夜市, and is half the book) 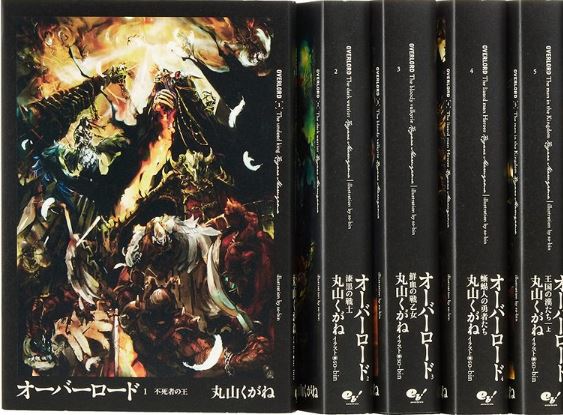 Why you Should Read and Watch Overlord