If you’re like me, when you first started learning Japanese and wanted to watch Japanese videos, you were referred to the video site NikoNiko Douga (ニコニコ動画). NikoNiko Douga is a Japanese equivalent of YouTube, made by Japanese for Japanese (an English version was recently introduced but I’m not sure about it’s popularity), complete with scrolling text across the screen so you can get reading practice in while you listen/watch.

The videos that I saw on there mostly consisted of vocaloid song covers and random South Park episodes. What I really wanted to watch were videos that contained Japanese in the raw. I’m not sure how much of this is on NikoNiko, but I recently rediscovered the power of YouTube and never looked back. YouTube has been steadily gained popularity among Japanese over the years and now there is massive content available to anyone who is ready.

But why should you study Japanese through YouTube and Japanese Vloggers?

Videos will range from 2 to 10 minutes making them easy to consume. Just like learning Japanese from Tweets: it’s easy to start and easy to continue. It’s so easy to continue watching content that you’ll be staring at the screen red-eyed wondering where the time went. For normal people, this is bad. For Japanese studying you, this is good.

There are YouTube channels and topics ranging on everything from music and exercise to daily news and science. Just like Manga, you can’t possibly not find something you will like. If you want to be able to express a wide range of ideas in Japanese, you first need to be exposed to them. So why not expose yourself to the bite-sized YouTube videos made by amateur Vloggers. Just because the videos are made by amateurs, doesn’t mean the quality is low! In order to keep a fan base they’ve got to keep producing quality content.

3. Unscripted, mildly edited Japanese (depending on the channel)

While a lot of the more formal content is edited down, many J-Vloggers have multiple channels: one main channel with the edited content and a second channel with more raw footage. This second channel is going to be crucial to you sounding like a Japanese person especially if you lack a Japanese population near where you live. You’ll be exposed to more correct use of filler words than you can imagine.

4. Links and recommendations to blogs, Twitter accounts, and other users are posted in the info section

Many of the J-vloggers out there have other avenues from which you can get Japanese. Twitter accounts are probably the most common, followed by Facebook pages and blogs. Also, for some strange reason, all J-vloggers seem know each other. Many times they will have collaborative videos or YouTube meet ups. They tend to be really awesome in that they will share the accounts of others that attended the event. Introduction to new users mean  more short videos, more topics, and more Japanese.

Comments =  endless example sentences. They tend to be extremely short and easy to read. While there is a tendency for slang to be used by some users, there is also some very formal writing to be found.

The comments section is also a great place to strike up a conversation with a Japanese stranger. While the exchange may only happen a couple of times with a certain person, there are so many other videos you can address people in to continue to practice output. Who knows, you may even make a friend or two.

You can’t wait to get started and dive into the Japanese Vlog entertainment world?

Here are my top 5 favorite channels to get you started:

Ari posts daily news tidbits and also has a second channel that he posts more raw footage. He speaks insanely fast but when you can understand him, understanding other Japanese becomes easier. In fact other J-vloggers have attempted just saying his intro to his vlogs and have failed (these are Japanese people)! Ari-san also has a blog, and twitter account that can be found through his YouTube channel. Koji makes videos on random purchased items, and social/promotional events ranging from a device that creates foam on top of a poured pint of beer to DJ’d events. His videos tend to lean towards reviews of devices, phones, screen covers, 自由人パンツ, etc. He’s an interesting guy and he applies an interesting flair to his videos. Chika’s videos are aimed at Japanese people learning English. She’s a bilingual Japanese girl that grew up in the US and returned to Japan for work. This is a good intro YouTube channel because she usually repeats herself in both Japanese and English, and this is also a great place to have language exchange type conversations with YouTube users.

She is good about explaining subtle nuances between Japanese words and their English “equivalent”. She shows cultural differences such as opening a present or dating in Japan. It appears that most of her subscribers are Japanese learning English, but there are still many foreigners learning Japanese. She also has a blog, twitter, and Facebook that she constantly updates. And finally, she is really cute.

Hikakin came to YouTube fame beat-boxing popular Japanese and American music. His beat-boxing skills are amazing and he has recently made a collaboration with Aerosmith in front of a few thousand people in Los Angeles. His channel focuses on food product reviews along with lots of randomness. He has a few other channels as well. Every couple of weeks, this channel uploads the most recent Japanese commercials for foreign viewing pleasure. It’s an interesting glance at some unique Japanese culture. It also seems that half of the commercials contain some kind of song and dance (often with animals involved). This is a much watch channel.

YouTube is incredibly vast and filled with Japanese Vloggers and videos. What are some of your favorite Japanese YouTube channels? Leave them in the comments!

No Japanese, No Life. 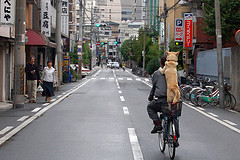