Anime is great, but sometimes it can just drag on a long time, and is too big a time commitment to fully enjoy. However, anime movies are your quick and easy solution. They are fun, self-contained, entertaining for a few hours, and have high replay value. Once you are finished you can even add the audio to your immersion ipod, allowing the study benefits to continue on endlessly. Turn tonight into a movie night while getting your Japanese study in at the same time.

Here are 8 anime movies spanning the past 3 decades that you will enjoy multiple viewings. Japanese Level:☆☆☆
Genres: adventure, comedy, drama, science fiction
Themes: family, technology, internet, social networking
Plot: Kenji Koiso is a high school student gifted in mathematics and computers.  He serves as a part time moderator for a massive virtual world called OZ.  Kenji ends up being invited to his friend Natsuki’s grandmother’s house for her 90th birthday.  Natsuki introduces Kenji as her fiance suddenly and that is just the beginning.  Kenji accidentally causes a problem in OZ and must work together with his friends to solve the problem before the system implodes. Japanese Level:☆
Genres: comedy, adventure
Themes: crime, theft
Plot: Lupin the III is a master gentleman thief. The film opens with Lupin and his gunslinger colleague, Jigen, making an escape from a casino loaded down with cash.  Only later to discover that the money is counterfeit from the Duchy of Caglistro.  They go to investigate and soon come across girl being chased by thugs; battle ensues and the girl ends up captured, but Lupin is left with her ring.

A group of assassins comes to retrieve the ring and it takes off from there. Lupin and Jigen get pulled into fast moving events whether they want to be or not.  Can they save the girl? Will they get their pay off?  Will they find any more allies? Japanese Level:☆☆☆
Genres: comedy, drama, romance
Themes: school life, time travel
Plot: High school student Makoto Konno lives in Tokyo and loves baseball.  One day she gains a mysterious power to “time leap” or go back into the past.  Makoto uses her power without thought and often quite frivolously.  Every time she uses the power however, she begins to notice that a tattooed number on her arm goes down.  What will happen when more serious events come to pass and the need to “time leap” becomes necessity rather than luxury? Will she regret having discovered it at all? Japanese Level:☆
Genres:  action, supernatural
Themes: dark pasts
Plot:  Genjo Sanzo (chain smoking, sarcastic Buddhist monk), Sha Gojyo (half water demon who can’t swim), Cho Hakkai (human turned demon), and Son Goku (Monkey King) continue their journey to India to stop the possible resurrection of the Ox-Demon-King, Gyumaoh. On their way, they come across a girl in need and come to her rescue. They end up staying at the estate where she lives, but not all is what it seems and soon their dark pasts come back to find them. Japanese Level:☆
Genres: slice of life, romance
Themes: coming of age
Plot: Taeko is 27, single and works at a Tokyo Company.  She decides to take a trip to visit her family in the countryside to help with the safflower harvest. On the train, she begins to recall memories from childhood in the 1960s.  After arriving, Taeko must wrestle with both her past and present selves reliving many memories of what it was like to grow up and looking at where her life is in the present.  There is a big decision to make–just what direction will Taeko’s life take at the end of this trip? Japanese Level:☆☆☆
Genres: drama, science fiction
Themes: military
War is brewing between 2 bordering nations: the kingdom of Honneamise and The Republic.  Shirotsugh Lhadatt is a young man who drifts into a controversial fledgling space program.  War will change him.  Is peace ever possible—what is the fall out of war—can we remain ourselves in the midst of brutality—what can one person do to change the future? Japanese Level:☆☆
Genres: horror, super natural, adventure, drama
Themes: vampire, post-apocalyptic
Plot: Charlotte, the daughter of a nobleman, is taken by Baron Meir Link, a vampire nobleman.  D, a half-vampire and legendary bounty hunter, is hired by Charlotte’s father to bring her back or kill her if she is turned.  D is not the only one hired and must compete with the Marcus Brothers and a woman named Leila, who works with them.  Leila has a personal vendetta against vampires.  It is a race against time to catch up to the Baron before his plan can come to pass.  Not all is as clear cut as it seems.  What will D decide to do? Japanese Level:☆☆
Genres: Mystery, psychological, thriller, science fiction
Themes: Dreams
Plot: In the not so distant future, technology has given us a device called the DC Mini.  With this machine, the user can view another person’s dreams.  Dr. Atsuko Chiba starts to use the device to help her psychiatric patients, even though it’s illegal.  She assumes the persona of “Paprika” inside the dream world.  The DC Mini has no safe guards build in and actually poses a great danger.  Dreams and reality start to slide together and one hell of a roller coaster ride ensues from there.

What anime movies do you love to watch again and again? 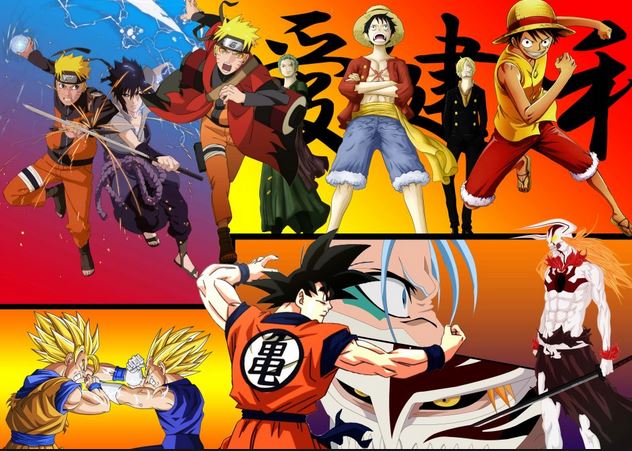 The 4 Kings Of Shonen Anime