We’ve gone through the online communities of Mixi, Ameba, Facebook and Twitter for learning Japanese, but what hasn’t really been explored is Google Plus. Does it have something new and different to offer for Japanese learners?

Google Plus is more an extended Twitter than an alternative to Facebook or Mixi. It uses a following system as opposed to a mutual friending system. Because of the lack of a friending system, there’s no messaging people to accept your friend requests. Instead, interaction can be gone about through communities.

These communities open up access to daily communication. Get news faster about the Japanese topics you’re interested in. Find Japanese friends. And if you’re a gamer, find Japanese people to play with. If you’re having trouble finding a community, Google Plus has communities suggested for you.

Why is this useful for studying Japanese? 1. By keeping up with what’s new in Japan through following communities that interest you, you’re constantly finding new material to watch, read and play.

2. Communities expose you to natural patterns of writing within the niches of society your interests are, helping build your Japanese to match who you are as a person.

3. Having a constant flow of Japanese helps to keep you in Japanese every day, despite how busy you might be. With Google Plus, you can get notifications while using Gmail and searching Google, therefore giving you that extra opportunity to stay connected in Japanese while doing other things.

Tips for finding the right community for you

It helps to look at other people’s introductions in that group and use a bit from their format. Here’s a sample template: Aside from just communities, there’s also the regular following aspect to this social network. Some Japanese celebrities will have Google Pluses of their own. A lot of idols tend to have them. You can also follow the people in your communities to see what they post outside of the community.

Google Plus has suggestions of its own of what feeds are interesting based on how many pluses it has received. Set your language settings to Japanese and they’ll be in Japanese. This means Japanese interaction every time you log on. You don’t have to be following anyone to get these feeds. They’ll already be on the home page. You can filter them out as well if you just want to read the feeds from the people you’re following.

One feed that I suggest following is Seiji Mamiya. Mamiya has done a great deal of promoting his striking photography of cats through Google Plus and has gained a lot of followers. Lastly, Google Plus offers you the chance to express yourself in Japanese. It serves as the practice ground for self expression as you test the waters with how to communicate like any other Japanese person would.

Don’t just read the feeds, but take a risk and post content for yourself. Communities serve as a great opportunity for this.

So what do you think? Thinking about adding Google Plus as your newest Japanese tool? Or are all these social networks too much to keep up with? 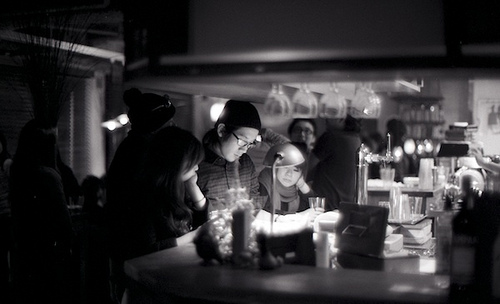 Manga Got A Chance (マンガごっちゃ)