Japan has some of the most adorable children in the world. Japanese TV always tries to make good use of this fact, and makes sure they appear throughout all forms of media. Normally I’m used to seeing cute little Japanese kids on TV and in person. And I have to agree, they are usually off the cute-meter. While I usually wouldn’t consider this an exciting topic, recently there was a segment on the variety show ニンゲン観察 that was just too good to pass up.

The premise behind ニンゲン観察 (or people monitoring), is to try to see how people react in different and strange situations that are set up and recorded by hidden camera. This is a common concept, that has appeared on many Western TV shows as well. But Japan is obsessed with it.

ニンゲン観察 has a segment where they trick children into thinking their pets can talk.  They set up cameras all around the house, set up a hidden microphone by the pet’s living space, have the parent leave the house, and then the pet calls out to the child and the fun begins.

Take ridiculously cute children, add a magical moment of fantasy to their lives, and watch them light up. This series has been fairly entertaining, but there was one episode that just made everyone who watched all warm and fuzzy. This is the tale of a girl named Ami, and her beloved pet goldfish that one day decides to strike up a conversation with her. Goldfish: “Do you know who this is?”

Now usually, you would think this might freak out some kids. As your pet goldfish just decided out of nowhere to have a conversation with you. But not Ami, she dives right in. This ultimate cute-Japanese-girl reaction is too powerful. Enough that comedian はるな from ハリセンボン uses it to make social commentary on women in Japanese society. I want the girls that go out of there way to pretend to be overly cute to watch this.

But wait, can we make this situation any more cuter? Of course. I’ve always imagined what I would do if Ochon could talk!

The discussion continues about Ami-chan being dressed like a princess, and loving princesses. Goldfish: “What princess are you?”
Ami-chan: “I’m the princess of (Ami-chan’s address censored) district 2.

Oh, you didn’t just give away your address did you?

She then goes on to sing and dance an original tune (with the theme of princesses attending parades) for the goldfish, which I feel is worthy of an English translation, as I think it could be remixed quite well. Now that we’ve granted the dreams of a little girl, and made her sing and dance in front of her talking goldfish, let’s give her a little life lesson. Get her to eat Shiitake mushrooms that she doesn’t like to eat. Ami-chan: The truth is, I don’t like Shiitake mushrooms. Ochon: I would really love it if you would eat Shiitake mushrooms.

So she does a pinky swear with the fish (which I will leave to your imagination on how that was accomplished). Her mother arrives home, and the first thing she does is eat Shiitake, while staring at Ochon, to show her that she kept her promise. Now I don’t know the long term effects of convincing your child that you can talk with your pet goldfish. And I doubt that the mother then went on to explain to tell her child that this was all a big lie so that the television audience could enjoy your cute antics. But hey, she’s eating her shiitake. And in the end, that’s all that really matters? For those out there with children, maybe you can try something like this?

What do you think? Adorable? Seen cuter Japanese child moments and have links to them you want to leave in the comments? 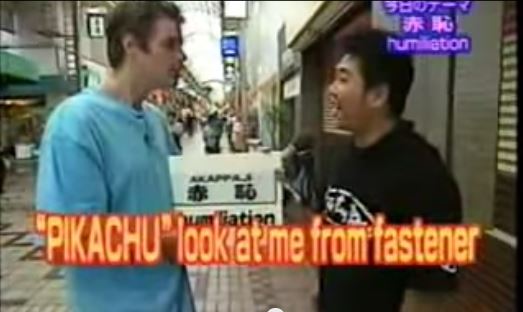 When Japanese People Are Told “Now Say It In English!”