You’ve prepared your equipment; now it’s time to get gaming! Because of the wide variety of games out there, in each installment of this guide I’ll focus on a different theme, whether it’s by price point, system, genre or some other factor. As a starting point, we’re going to take a look at the Nintendo DS, one of the highest-selling systems of all time: it’s region-free, cheap and easy to get your hands on.

It’s not a game, but it’s worth mentioning first. This piece of software is a bargain for anyone that keeps wishing for one of those expensive electronic dictionaries like a WordTank. Using the Nintendo DS’s stylus and touchscreen interface, Kanji Sonomama Rakubiki Jiten basically turns your DS into a stylus-equipped electronic dictionary for a fraction of the price! It includes Japanese-Japanese, English-Japanese and Japanese-English dictionaries, word banks for storing vocabulary, bonus functions like kanji quizzes and clocks, and some fun Nintendo Easter eggs. A used cartridge can be found for under 2000 yen. In 2009, Nintendo released each of Kanji Sonomama’s dictionaries as downloadable titles under its DSiWare program for 800 points apiece.

This first-person adventure/horror game centers around a game that, like the video tape in The Ring, curses all who play it to die within seven days. Gameplay alternates between a first-person perspective where the player talks to others, solves puzzles and avoids monsters, and playing the game-within-a-game itself that resembles a glitched version of Dragon Quest. A sequel was released in 2008 called ナナシ ノ ゲエム目.

“A man lives on the 20th floor of an apartment building. On rainy days, he takes the elevator when he comes home from work, but on sunny days, he climbs all 20 flights of stairs. Why?” Based on the books of lateral thinking puzzles authored by Paul Sloane and Des MacHale, and released under the “Atamania” banner of puzzle games, this game stretches your mind and vocabulary. A mysterious guide will present you with stories, told in silhouette montage, and challenge you to find the truth at the heart of the mystery by connecting concepts to ask yes or no questions.

This game isn’t very action packed, but it’s hard to recommend a game better suited for Japanese learners. Not only is it filled with full furigana and everyday vocabulary, told in bite-sized stories that don’t overwhelm beginners, it’s a game that lets you see how natural Japanese questions are formed in real time. When you draw lines to connect two concepts, the game will form a question for you. In real life, there are situations where you know what you want to ask but have no idea how to ask it. This game lets you see thousands of sample questions for hundreds of situations that can improve your question-forming abilities.

Naruhodo Ryuuichi is a budding defense lawyer, learning the ropes of the courtroom under his superior Ayasato Chihiro. But when he arrives at their office one evening and finds her dead, he must work together with her sister Mayoi, a shaman who can channel the spirits of the deceased, to solve the mystery and bring the killer to justice. Along the way, he’ll solve other cases and run up against dozens of colorful characters, including the famous prosecutor Mitsurugi Reiji. A courtroom-drama-adventure-game hybrid, Gyakuten Saiban adventures run in two phases: an investigation phase where Naruhodo visits crime scenes and gathers evidence, and a courtroom phase where players must carefully read witness testimonies to spot inconsistencies and present proper evidence to challenge them.

The series is still growing. Two more DS games starring Naruhodo have been produce, and two spin-off games from a prosecution point of view called 逆転検事 (Gyakuten Kenji) were more recently released. The original Gyakuten Saiban has been rereleased for several platforms, such as iOS and the Wii.

I admit, those few games up there are pretty laid-back, action-wise. To send you off, here’s one that will send you into fits. It’s throw-your-system-across-the-room hard. You play as Tsukimori Kousuke, a doctor who must battle an outbreak of mysterious man-made viruses called GUILT. Using the DS’s touchscreen, players must disinfect and suture wounds, zap tumors with lazers, inject patients with serums and more, while working against the clock and stopping patients vitals from dropping to zero. Filled with medical jargon and brutally difficult missions, this game is an exciting challenge for players in more ways than one. Try and beat the X1 mission. I dare you.

Chou Shittou Kadukeusu was also released on the Wii, with updated graphics, sound, and a Wiimote-based control scheme that arguably makes the game a good deal easier. 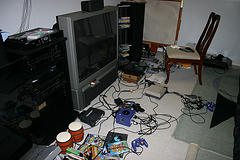 Simulating a Japanese Restaurant From Home